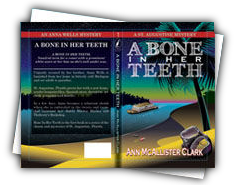 MAY,2012 – A lovely venue at which to enjoy a book signing! The museum workers set up a table on the back veranda of the Lighthouse Museum where a gentle breeze cooled visitors as they came by before beginning their path up to the tower to climb over 200 steps for a magnificent view of St. Augustine and the ocean.  I have not done the climb but many of my family have been up there.

Have you ever climbed a lighthouse tower? What was your experience?

I have included below a short history from Wikipedia of the St. Augustine light tower and all that has been done to preserve it.

St. Augustine was the site of the first lighthouse established in Florida by the new, territorial, American Government in 1824. According to some archival records and maps, this “official” American lighthouse was placed on the site of an earlier watchtower built by the Spanish as early as the late 16th century.[2] The Map of St. Augustine depicting Sir Francis Drake’s attack on the city by Baptista Boazio, 1589, shows an early wooden watch tower near the Spanish structure, which was described as a “beacon” in Drake’s account. By 1737, Spanish authorities built a more permanent tower from coquina taken from a nearby quarry on the island. Archival records are inconclusive as to whether the Spanish used the coquina tower as a lighthouse, but it seems likely given the levels of maritime trade by that time. The structure was regularly referred to as a “lighthouse” in documents dating to the British Period beginning in 1763.

In 1783, the Spanish once again took control of St. Augustine, and once again the lighthouse was improved. British engineer and Marine surveyor, Joseph F.W. Des Barres marks a coquina “Light House” on Anastasia Island in his 1780 engraving, “A Plan of the Harbour of St. Augustin.” Jacques N. Belline, Royal French Hydrographer, refers to the coquina tower as a “Batise” in Volume I of “Petit Atlas Maritime.” The accuracy of these scholars is debated still; Des Barres work includes some obvious errors, but Belline is considered highly qualified. His work provides an important reference to St. Augustine’s geography and landmarks in 1764. Facing erosion and a changing coastline, the old tower crashed into the sea in 1880, but not before a new lighthouse was lit. Today the tower ruins are a submerged archaeological site whose smooth stones may still be seen at low tide.

The 1824 lighthouse was established on the site of the Old Spanish watchtower.

Early lamps in the first tower burned lard oil. Multiple lamps with silver reflectors were replaced by a fourth order Fresnel lens in 1855, greatly improving the lighthouse’s range and eliminating some maintenance issues.

At the beginning of the Civil War, future mayor Paul Arnau a local Menorcan harbor master, along with the lightkeeper, a woman named Maria De Los Delores Mestre, removed the lens from the old lighthouse and hid it, in order to block Union shipping lanes. The lens and clock works were recovered after Arnau was held captive on a ship off-shore until he revealed their location.

By 1870 beach erosion threatened the first lighthouse. Construction on a new light tower began in 1871 during Florida’s reconstruction period. In the meantime a jetty of coquina and brush was built to protect the old tower. A trolley track brought building supplies from the ships at the dock.

The new tower was completed in 1874, and put into service with a new first order Fresnel lens. It was lit for the first time in October by keeper William Russell. Russell was the first lighthouse keeper in the new tower. He was the only keeper to have worked both towers.

For 20 years the site was manned by head-keeper William A. Harn of Philadelphia. Major Harn was a Union war hero who commanded his own battery at the Battle of Gettysburg. With his wife, Kate Skillen Harn, of Maine, he had six lovely daughters. The family was known for serving lemonade out on the porches of the keepers’ house, which was constructed as a Victorian duplex during Harn’s tenure.

On August 31, 1886 the Charleston earthquake caused the tower to sway violently, according to the keeper’s log, but there was no recorded damage.

After many experiments with different types of oils, in 1885 the lamp was converted from lard oil to kerosene.

During World War II, Coast Guard men and women trained in St. Augustine, and used the lighthouse as a lookout post for enemy ships and submarines which frequented the coastline.

In 1907 indoor plumbing reached the light station, followed by electricity in the keeper’s quarters in 1925. The light itself was electrified in 1936, and automated in 1955. As the light was automated, positions for three keepers slowly dwindled down to two and then one. No longer housing lighthouse families by the 1960s, the Keepers House was rented to local residents. Eventually it was declared surplus, and St. Johns County bought it in 1970. In that year the Keepers’ house suffered a devastating fire at the hands of an unknown arsonist.

In 1980 a small group of 15 women in the Junior Service League of St. Augustine (JSL) signed a 99-year lease with the county for the keeper’s house and surrounding grounds and began a massive restoration project. Shortly after the JSL adopted the restoration, the League signed a 30-year lease with the Coast Guard to begin a restoration effort on the lighthouse tower itself. The lighthouse was subsequently placed on the National Register of Historic Places in 1981 due to the efforts of local preservationist and author Karen Harvey.

The antique lens was functional until it was damaged by rifle fire in 1986 and 19 of the prisms were broken. Lamplighter Hank Mears called the FBI to investigate this crime. As the lens continued to weaken, the Coast Guard considered removing it and replacing it with a more modern, airport beacon. Again championed by the JSL, this plan was dismissed and the 9-foot (2.7 m)-tall lens was restored. Joe Cocking and Nick Johnston, both retired from the Coast Guard, worked tirelessly to perform this, the first restoration of its kind in the nation. These two experts work with Museum staff and continue to care for the lens. Volunteers from Northrop Grumman Corporation and Florida Power & Light clean and inspect the lens and works every week.

Today, the St. Augustine Light Station consists of the 165-foot 1874 tower, the 1876 Keepers’ House, two summer kitchens added in 1886, a 1941 U.S. Coast Guard barracks and a 1936 garage that was home to a jeep repair facility during World War II. The site is also a National Oceanic and Atmospheric Administration weather station.

anne.heymen@staugustine.com
A Bone In Her Teeth
By Ann McAllister Clark; Infinity: $16.95. ■
Anna Wells, who grew up in Michigan, finds herself suddenly in St. Augustine the owner of what she thought was the home of a dear aunt. Instead she finds she’s inherited a 1956 outfitted barge moored at Safety Harbor Marina.
Life looks pretty grim for the widow who, with her husband, once owned a bookstore in Michigan. But eventually caught up in the unusual family of boaters at the Safety Harbor Marina and hired by the dear man who owns Thoberry’s Bookshop in historic St. Augustine
Anna finds her life taking twists and turns she never expected — including romance and murder. Along the way, Anna meets some fascinating and some frightening individuals.
As author Clark explains, “A Bone In Her Teeth” is a “nautical term for a vessel with a prominent white wave at her bow as she’s well under way.” And the author also notes that this book in “the first in a series of the charm and mysteries of St. Augustine, Florida.” Clark’s first book is fast paced, weaves an intriguing tale of murder and for residents of St. Augustine provides further challenges as the reader tries to figure out just where the marina is located, especially in regard to the bookstore at which Anna finds a position.
And there are “fun” characters woven through “Bone,” like the Crumb Sisters, who operate a sightseeing carriage and call the marina home; and others who show Anna how to adapt to life on a boat “home.”
You’ll find “Bone” a fun read, especially great for the winter nights which have descended now upon the ancient city. Snuggle up to a roaring fire and become immersed in Anna’s new life in the oldest city. You’ll find Clark’s book a quick, fun read.
By Ann McAllister Clark| 2017-01-16T19:15:16+00:00 January 6th, 2012|Book signings, From The White Wicker Desk, St. Augustine, Thomas Thoberry's Book Reviews, Uncategorized, Writing & Writers|Comments Off on St. Augustine Record Newspaper: A Bone In Her Teeth book review
Read More

Many book lovers came to my book signing for A Bone In Her Teeth, a St. Augustine, Florida mystery.  The Wolf’s Head Bookstore in St. Augustine hosted and it was a success for them too!   We scheduled it during the Uptown Saturday Nights event that is held on the last Saturday of each month.   So the streets were filled with folks wandering around the antiques shops, art gallerys and gift shops.  It was a fine time!

Please visit my website: annmcallisterclark.com to see the cover designed by John Potter of escapekeygraphics.com.  He is located in Fort Lauderdale, Florida.

Thank you for visiting. 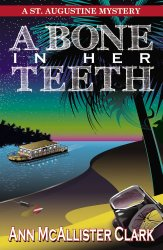 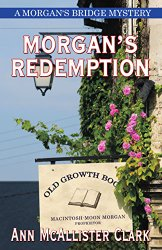 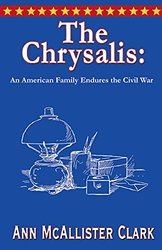